My Son decided he wanted to join the scouts, but not just any scouts, he wanted to join the ones that wore the blue shirts that we had seen at the remembrance parade. So after a little bit of research we found out that they were the 25th Newport Air Scout Troop. He duly joined and really enjoyed going there. He knew no one there but took to it like a fish to water. I felt that I wanted to support the group and help out in any way I could but I had strict instructions from my son: don’t come to my scouts and embarrass me! I found out after making a few enquiries with my son’s scout leader that there was also a Beavers and Cubs pack, always on the lookout for volunteers and I was given a day and time to pop down and meet ‘Gill’ Black, who would find me something to do. That was about five years ago and I’ve become good friends with Gill.

Gill, and husband Bruce, courting during the 1960s.

I felt it was time to do a piece on one of the amazing people we know in Newport, and Gill certainly comes under that banner. A tireless volunteer with the Scout movement, I asked Gill if I could do an interview with her for the blog, and she agreed. She very kindly invited me to tea, and as I sat and ate my way through a scrumptious salad, jacket potato and fruit salad, she told me about her scouting journey.

‘It was 1976 and the scout hut had just been built by volunteer parents who had a variety of skills. Andrew, my son who was eight, wanted to join cubs. We took him along to the Friday night pack whose leader was Brian James. Brian was running it and needed help collecting the weekly subs. As my job before having my children was in an account department of Eagle Star Insurance Company’s office, I offered to help. Now, forty-one years later I’m still collecting subs, but only once every school term. I also run the cub pack, the beaver colony, am Group Scout Leader and do a bit of fund raising.’

Over the next few years the whole family got involved one way or another. Husband Bruce, who was a lecturer in engineering, became involved in the running of the committee, which included many people from different walks of life. Gill’s young daughter Susan, along with Andrew, joined the group’s marching band and were lead drummer and trumpeter/band master, until the band finished in 2002 when the numbers were down.

At the start, Gill enjoyed taking on an active role, both in activities for the young people and the wider social opportunities it the movement offered.

‘My first camping experience was at Wentwood, where the group had a field they regularly used. I remember there were thirty six young people at that camp. We had two old massive army tents that held about 18 young people in each. But the problem was that the field was on a slope, so a lot of the time the cubs would have rolled out the tent by the morning. I remember one kiddie slipped right outside and quite far down the hill, but was still zipped up tight in his sleeping bag. But it was all good fun. We had lots of activities as well, which they could earn their badges for camping skills, tracking and cooking and the like. We would build a big camp fire, which we ate round, and every night we would sing camp fire songs and do camp sketches around it. And of course there was no toilets then, you had to dig a hole and bury it.’

There must have been a few accidents, I suggested.

‘Only one major incident then, all the rest were just minor knocks and scrapes. It happened when two of the boys started arguing about whose turn it was to bang in a tent peg. The one with the mallet picked it up and threw it at the other lad. I will never forget the sound that the mallet made hitting the other boy’s head, it sounded just like the sound of hitting a coconut. We had to find a public phone box, as we had no mobile phones in those days, to let his parents know he was going to hospital. He was OK, but had to be checked every two hours. Other than that there were no other serious incidents at summer camps.’ 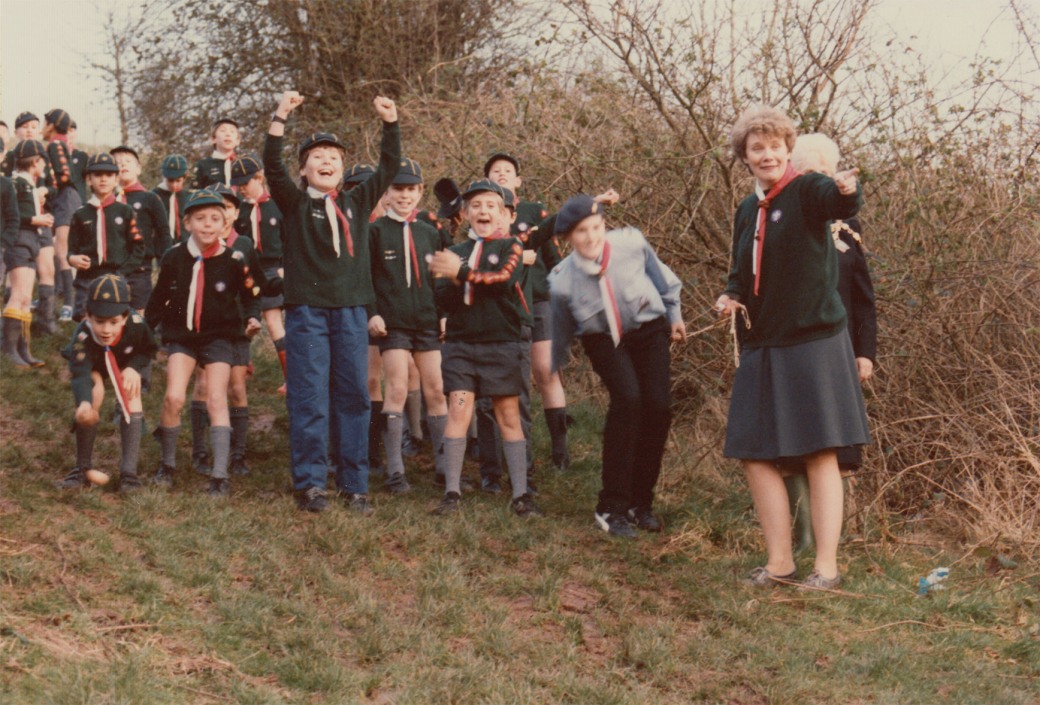 What sort of things would you do at the scout hut I asked? 25thMalpas has a hut tucked away behind St. Mary’s Church Hall.

‘Well the hut opened in 1976, the group at its heyday would be using the hut on a daily basis. Then we had at least one hundred and fifty children. We had three cub packs, three troops and an adventure unit, a marching band consisting of members from all sections of the group plus a few of the Girl Guides from Malpas. We did, and still do, allsorts from the hut. We have our annual Fete, this year it’s on 23rd September, all welcome. The mayor of Newport used to come and open the fete, but not anymore, suppose they are busy people like the rest of us. We started our canal walks from there to take part in the national spring clean week and won three cash prizes over the ten years that we took part, which we used to go off on a visit for example to West Midlands Safari or St Fagans. And all the weekly meetings are held there, unless we go on visits to the fire station, police station and so forth. 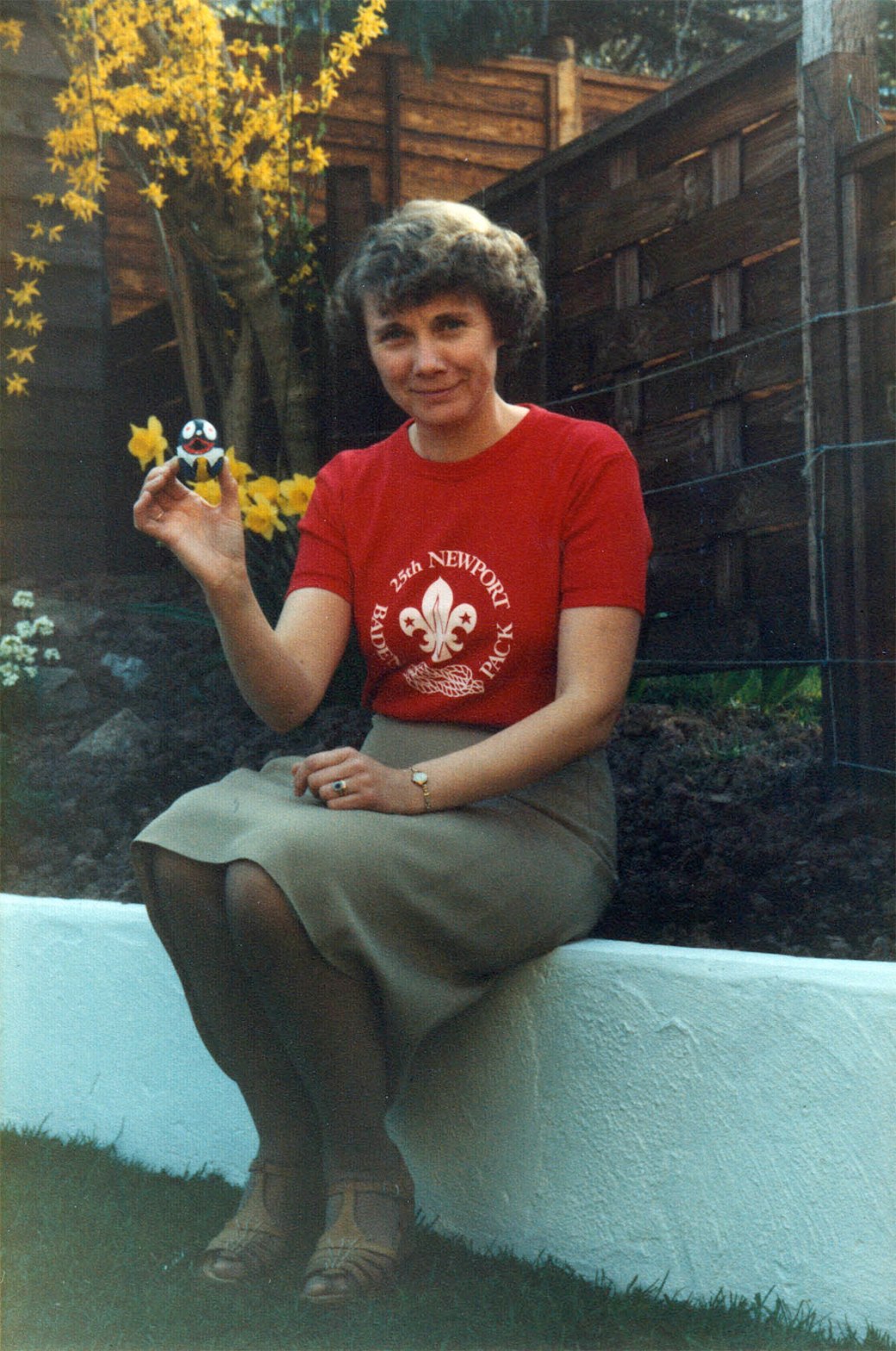 We use to have a monthly Church parade. The church would be packed on a Sunday with the young people and we had a waiting list for that. If you missed three weeks in a row you lost your place and it would be offered to the next person on the waiting list. We had some very good vicars who enjoyed working with young people. But the church changed the time of parade to later on a Sunday and a lot of the kids couldn’t come because they have other commitments, you know football and rugby – which they play on a Sunday. And there was a new vicar and it all just fizzled out, so we decided to stop it.

What about the social events that you mentioned? Did you have lots of those?

‘We used to have cheese and wine nights, which were very popular then. We would sell raffle tickets for extra wine and make quite a bit of money. We had skittles matches and we would celebrate founders’ day at the local pub, where we would all meet up. This was in the 1970’s and early eighties. We would also hire coaches and go out for the day, West Midlands Safari Park and places like that. The coaches were always full. We went boating and for walks along the canal to do our nature badge. You never had to fill in any forms, like you are inundated with now. Back then it was common sense.S I would never let anyone do anything that I would not allow my own children to do. It was about manners, discipline and respect, though there does not seem to be much of that left in the world now. Children are different now to what they used to be, I’ve seen a real change. Today they just want to bawl and shout and everything has to be ‘fun’, there’s not much discipline or respect anymore.’

You’ve seen a lot of changes then?

‘Oh yes’ replied Gill ‘so now there are only two district parades: St Georges Day and Armistice. A lot of kids have other commitments and it’s hard to ensure we can get enough numbers to turnout. When I started, only scouts did camping and outdoor activities, now all sorts of groups do it – youth groups and schools, we still do it but it’s not as popular. And this year’s cub camp for instance, there were 8 cubs to start with, three went home for various reasons – sick, home sickness and other reasons – which left five. We had water fights and cooking and lots of games, and those that stayed enjoyed themselves. But you can see it’s a big difference from the thirty six that came when I started. ’ 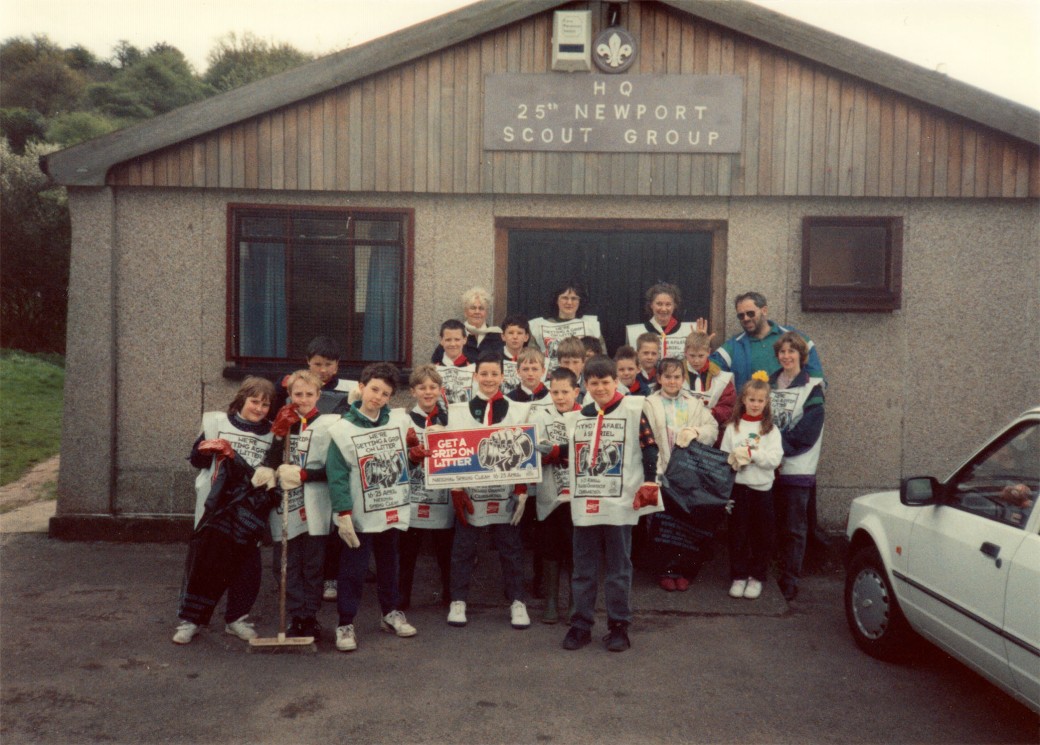 Do you get anything for being a scout leader, like qualifications? Gill thought for a moment,

‘You get a lot of different training if you become involved, every year there is training. I’ve done two wood badges, Cub Scout leader, and Group scout leader for the management side of things, various first aid training, safety, safe guarding, and management courses for the running of committees and the like, plus others. And of course everyone has to be checked with a DBS. I’ve had a few different helpers and leaders over the years. Sandra, or as I use to call her – ‘Squirrel’, helped me for several years. She was very good and we worked well together, but she died five years ago. A few have helped out since then, but no one sticks at it.’ 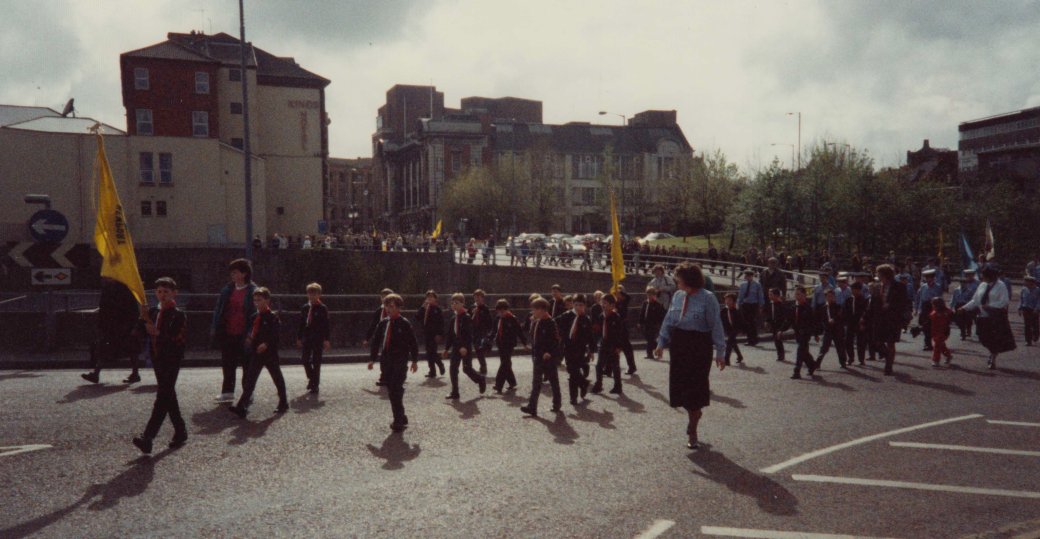 Parade day, 1980s. The old main Newport Post Office building can be seen in the background, before an NCP car park took its place in 1988.

Why do you still do it Gill?

‘We kept doing it after both my children left. We liked the social element and the children, of course. I enjoy teaching the kids various things, and I think I’m OK at it because the kids I get coming now are the children of the previous cubs and scouts. It takes up a lot of time but I don’t mind. Bruce does not do it anymore, and I hoped other people would step up and take over, but that’s not happened. It’s hard to get people involved – especially as it’s volunteering -everyone wants to get paid for it. Sometimes I have to remind people that I am a volunteer. There are times when it can feel that we are like a cheap babysitting service, but there are some really nice children that come along, polite and helpful, and that makes up for it.

Scouting children are my grandchildren.

My own children are grown up and live away. Of course I could not do any of it without the support of my husband Bruce, who I like to call my personal assistant or PA. He’s no longer on any of the committees but he helps me out by doing posters and forms, etc.

Gill, with husband Bruce, at scout camp – just after digging the hole for (you know what!), 1980s

It’s in my blood now and you don’t like to stop. I’ve had great support over the years from numerous parents but mostly it’s on an occasional basis.

Then there’s always one child that comes up to you and says ‘thank-you for a great camp’ as opposed to those that just walk away. And that makes it all worthwhile. 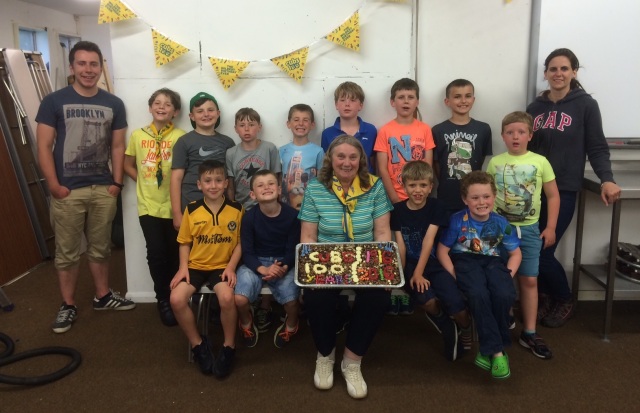 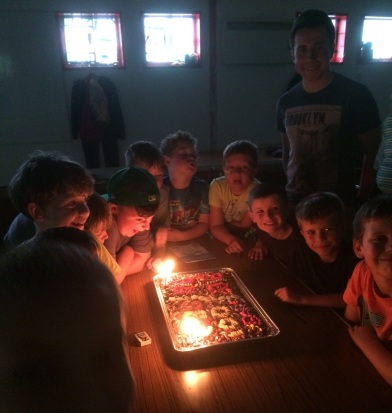 From my own observations Gill does a fantastic job as Group leader, Black Beaver and Akela, where she runs and plans all the events for the cubs and beavers. In addition, she gives her time and skills to the wider group for the Christmas post, the annual Fete, AGM and any other event that comes along. She is truly an inspiration to scouting and volunteering. Thanks Gill, for all your hard work.